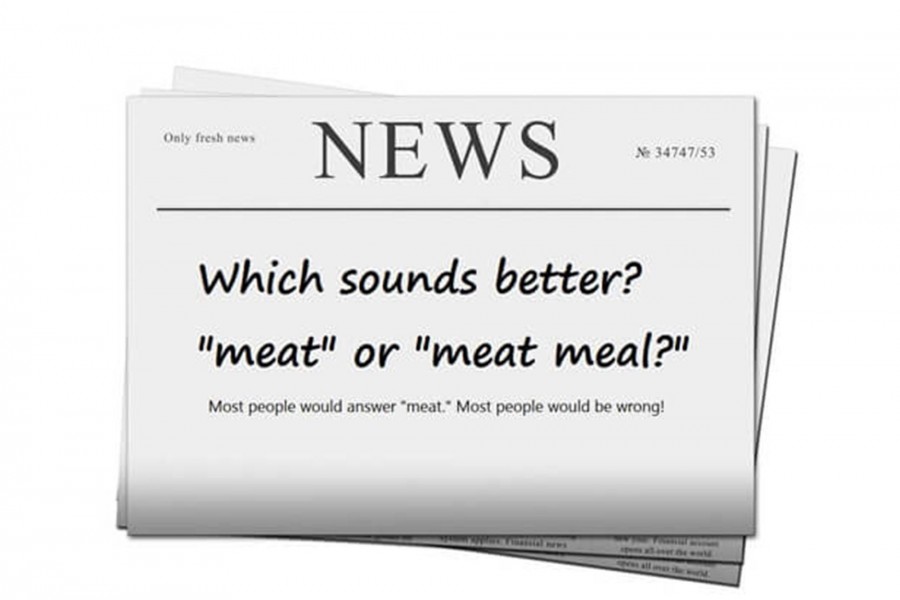 If you’re looking at a list of ingredients, which sounds better: “meat” or “meat meal?”

So let’s compare “chicken” versus “chicken meal” when they appear on a label’s ingredient list. “Chicken” comes in at 70 percent water. It contains about 20 percent protein because of this high water content. “Chicken meal” has 5 percent moisture; it’s a more concentrated source of nutrients as it’s not diluted by water. It has about 70 percent protein. So the chicken is contributing about one third of the protein the chicken meal is contributing despite its higher weight.

Let’s look at it another way. “Chicken” is heavier than grains prior to cooking, which places it ahead of grain in the ingredient list. But after cooking off the moisture, the chicken’s weight is reduced by two thirds, while the grain’s weight is negligibly reduced as grains have low water content to start with. After cooking, the weight of the remaining chicken will likely be less than that of the remaining grain, so this “chicken-based” food is actually mostly grain-based rather than meat based.

In contrast, “chicken meal” changes very little in moisture content after cooking and will still weigh about the same. A food that has higher chicken meal content in relation to grain content before cooking will still have that same relationship after cooking.

Some pet food companies realize that consumers are impressed by the word “meat” or “chicken” in preference to “meal.” They actually pay extra to have meat shipped to their plants in refrigerated trucks, then add it to the foods and cook the moisture out. They are, in essence, paying to ship water. And the consumer is paying for this extra cost and ultimately receiving less meat and meat protein for their investment.

But what’s in meat or poultry meal? Some people envision a gruel made of left-overs, but that’s not the case. There are laws that determine what can be in meat meal: Meat meal is made of animal tissues and cannot include added blood, hair, hoof, horn, hide trimmings, manure, stomach or rumen contents. Similarly, chicken meal is made of clean flesh and skin with or without accompanying bone and must not contain feathers, heads, feet or and entrails.

So now which would you rather see at the head of your dog food’s ingredient list? That’s right, meal. Whole meat sounds good, but it’s really a marketing ploy that often has you paying more and always has you and your dog getting less!

If your dog hasn’t already joined the 1000’s happy and healthy dogs eating Stay Loyal Grain-Free Formula then jump over to our product page and get a bag today. Remember there is no risk in trying because you are protected by our 100% Money Back Guarantee. Click here to go to Stay Loyal.

Newer11 Reasons Why You Need to Check the Fat Levels in Your Dog’s Food!
OlderCanine Christmas Caveats

Can u get stay loyal locally or is it internet based,

There are few independent stores in Qld. Otherwise the internet is the easiest place to order.